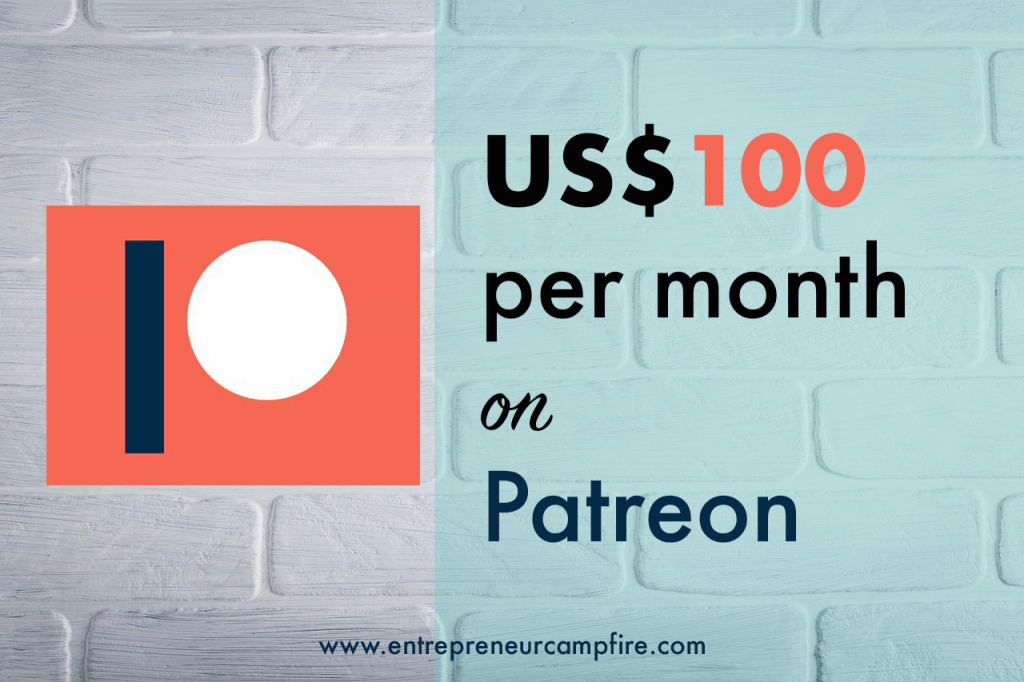 But fewer Malaysians know about a website called Patreon and how it allows creators to add an extra income stream for themselves.

If you’ve never heard of Patreon, let me explain what it is about:

Patreon is a website that adapts the idea of patronage into the online era.

Patronage is described by Wikipedia as “the support, encouragement, privilege, or financial aid that an organization or individual bestows to another.”

Famous artists like Leonardo Da Vinci, Michelangelo, and William Shakespeare have all received financial aid using the patronage model at some point.

Although Patreon is not yet as popular in Malaysia as other parts of the world, there are already some Malaysians making money on Patreon.

If you are a creator yourself you might be wondering: how much money can you make on a platform like Patreon? What kinds of work should you do to make money on Patreon?

To help you answer these questions I have compiled together ten creators making between $40 and $100 a month on the platform.

Alright, are you ready to get started?

5 Malaysians Making More Than US$100 a month on Patreon

Cartoon Hooligans is a YouTube channel that makes fun parodies of popular superheroes like Superman and Spiderman.

Right now, Cartoon Hooligans’ patrons are paying them $173 per video released. Since Cartoon Hooligans release 1 – 2 videos a month, their Patreon income hovers between $173 and over $300 a month.

Check out Cartoon Hooligan’s Patreon Page and their work on their YouTube channel:

Mabel Story is a creator of miniature characters using clay. She specializes in creating her own styled Chibis.

Chin Yew is an artist creating comics and illustrations. His comics often revolve around his own life and points of views which his audience can relate to.

Check out Chin Yew’s Patreon page and some of his work below from his Instagram page:

Imagined Malaysia is creating talks, workshops, and publications about Malaysian history ($219 per month)

Imagined Malaysia aspires to publish research-based writing about Malaysian history. Their goal is to teach Malaysians how to love history.

Mun Kao is the creator of A Thousand Thousand Islands, “Southeast Asian-themed fantasy visual world-building project.” The fantasy world features some of Southeast Asia’s most interesting myths and legends such as Pontianak and Bunians. His goal is to showcase Southeast Asian culture as the main highlight, and not the sideshow.

In his own words: “Pontianaks will not be Southeast Asian vampires and Bunians are not Asian elves, because they are not.”

Check out Mun Kao’s Patreon page for more details on the project.

6 Malaysians Making More Than US$40 a month on Patreon

TinyPinc is a Malaysian artist specialized in creating tiny food figurines. Some of her most popular work features popular food that Malaysians love like Nasi Lemak and Ang Ku Kueh.

Here is some interesting work by TinyPinc from her Instagram page:

Khairol Hisham creates paperminis that people can print, cut out and assemble for role-playing games (RPG). Khairol Hisham’s RPGs explore all kinds of themes from mideval to fantasy to horror.

Check out Khairol Hisham’s Patreon page for more details on the project.

Here’s a sample of his mini figure sets:

Xunobi is a team of artists specialized in creating and painting miniatures.

On Patreon, Xunobi offers tutorials on how to paint miniatures on Patreon.

Check out Xunobi’s Patreon page for more details on what they do. And here’s a sample of their work:

Aimee Chow is creating a Fantasy Webcomic of godly proportions! ($45 per month)

Aimee Chow is the creator of a webcomic called Tales of Pylea. It chronicles the power struggles between immortal demigods.

Find out more about Tales of Pylea on Aimee Chow’s Patreon page. Below is a sample of her work from her story website:

Weinye is the creator of a webcomics series based on her own life called ‘It’s Weinye”. Her work chronicles her day to day as a young woman. Weinye’s work has been featured both locally as well as internationally on sites like Buzzfeed. Right now, Weinye has over 155,000 followers on Instagram.

Check out Weinye’s Patreon page and some of her webcomic samples below:

Azreenchan is an illustrator creating illustrations, comics, and travelogues.

Check out Azreenchan’s Patreon page for more details on the project and here are some samples of her work style:

There you have it – eleven Malaysian creators making between more than $40 – $100 a month using Patreon.

As you can see, it is possible for you as a creator to make money in a variety of different creators. You can be a writer, a comic artist, a YouTuber and more.

Although there is some amount of money to be made on Patreon, it is unlikely for most creators to make a full-time income from it.

If you want to get started on Patreon, you can just sign up here.

Would you consider using Patreon? Know any more Malaysians making money on Patreon I should add to this article? Let me know in the comments below!